Hairy Sea-Mat (Electra pilosa) Bryozoans are spreading out over kelp fronds in a star-shaped formation resembling a splat of white paint. These are somewhat new to New England, invasive. Also, little microscopic, spiral-shelled animals have attached themselves to the kelp on the underside. This photo was taken in Folly Cove, Cape Anne, Massachusetts.

Bryozoan colonies shade out light from reaching the kelp to which it attaches and can generally weaken the plants.
From Mass.com: "White, lace-like encrusting bryozoan that grows on kelp and other seaweeds. Colonies tend to have irregular edges, often star shaped or branching. Individual Zooids are oval and do not have the regular, brick-like appearance of M. membranacea" (shown elsewhere here).
They are an invasive in New England.

Also shown are little spiral-shelled animals (Spirorbi borealis) which have attached themselves to the kelp. These spirals are Sinistral Spiral Tube Worms, which grow to 1/8". Sinistral means "of the left hand", being the opposite of dextral. The Dextral Spiral Tube worm turns in the opposite direction, clockwise. They are sedentary, segmented worms. When out, they display translucent, feathery gills. They are on both the North Atlantic and Pacific coasts, in cool water. They are hermaphrodites. 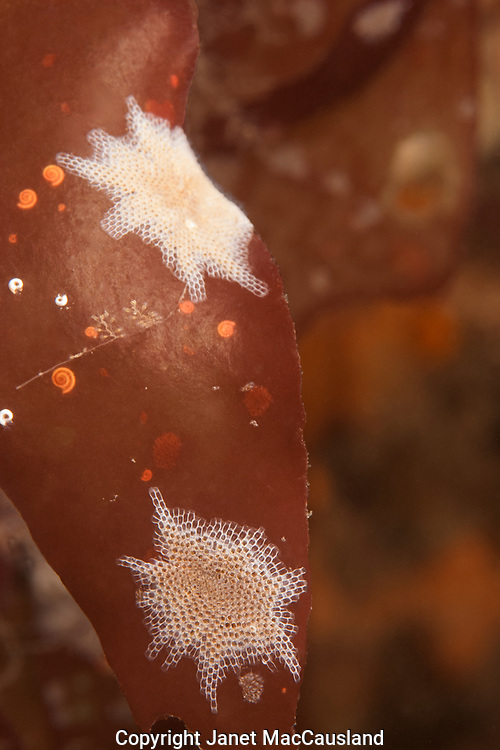