An Atlantic Wolfish comes out of its den in Eastport, Maine. Small populations of Wolfish survive in about 60 FSW and deeper, in rocky crevices where the fishing trawlers don't go. They eat crabs and other crustations, sea urchins, mollusks and other animals they can crush. They grow to 5 feet in length and 55 pounds or more. There are two other forms found in Canadian waters, a total of three: The Spotted Wolffish, The Atlantic Wolffish shown here, and The Nothern Atlantic Wolffish. A cold water family, the Wolffish make it's own natural antifreeze. They are conditioned to live in cold waters, from 30 to 52 °F (−1 to 11 °C ). The Wolffishes play an important role in ecology, and are currently overfished. They are of concern, but not yet declared endangered. The Atlantic Wolffish conservation status is described as Data Deficient (IUCN 3.1). As of 2017, NOAH has a no take order in affect. "Atlantic wolffish is a zero-possession species, meaning vessels holding a federal ground fish permit may not fish for, possess, or land Atlantic wolffish."_NOAH.

Wolffish are named for their 4 to 6 fang-like teeth. Behind these protruding teeth they have 3 rows of grinding teeth. They may look ferocious, but they are not known to be dangerous to divers and can be hand fed.

They have been observed sharing dens, and the male will watch over the comparatively large fish eggs and fry for 3-9 months. 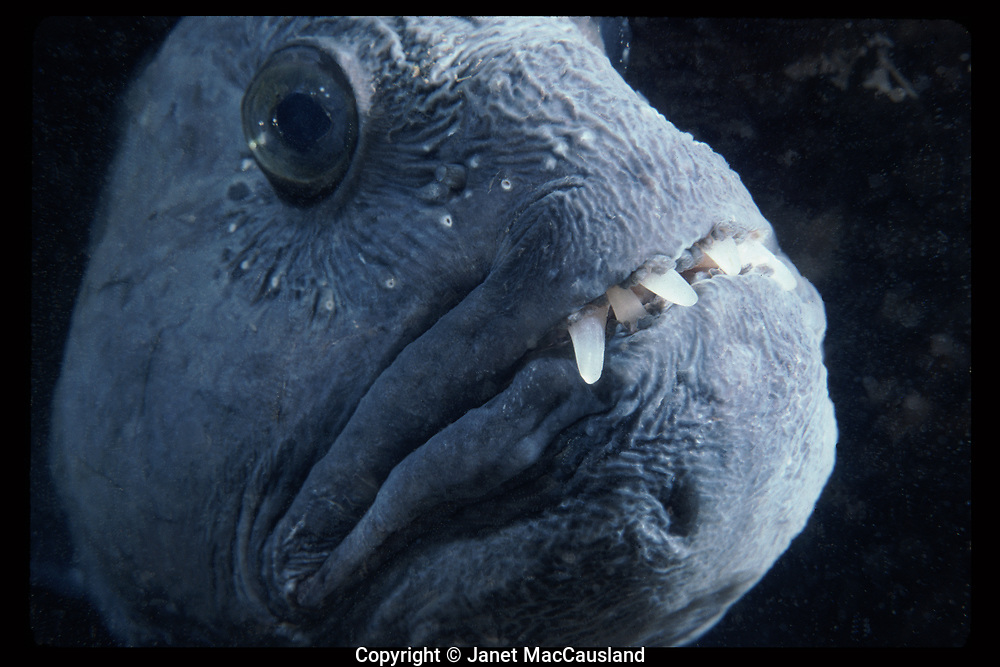